Inhalt überspringen
This is an older post. Please note that the information may not be accurate anymore.
» Konzert «
Sonntag • 29.10.17 • 20:00 Uhr

Initially emerging in 2011, Valerian Swing cemented their place as one of most interesting bands in the Italian heavy scene, with their second album „A Sailor Lost Around The Earth“, and then at an international level with 2014’s ‘Aurora’.

Now 2017 sees the return of Valerian Swing following a change of personnel. One that saw the exit of bassist Alan Ferioli in favour of baritone guitarist Francesco Giovanetti. The trio went and created their fourth full length album, during a period of personnel, artistic growth and maturity that has seen them gradually expand their spectrum of sound beyond the boundaries of just being ‘heavy’. This latest chapter has resulted in new album ‘Nights’ that is undoubtedly their most accessible, rich and varied record to date.

‘Taking post-rock as a starting point, they add a little math rock, heaps of riffs, and an occasional chant to create something magnificent’
Rock-A-Rolla

‘They found their personal approach to the songwriting, with a skillful mix of musical genres such as hardcore, indie, post rock, progressive and electronic sounds’
Rolling Stone

Music can be heard, described, categorized and analyzed in countless ways. Theodor W. Adorno for instance distinguished between popular and serious and by this gave music a difference in value which is still in use today. But no matter how one approaches music, it is for sure that music is socially produced as well as socially productive. 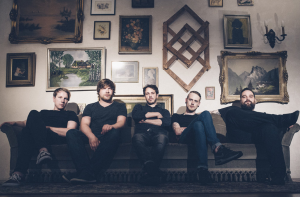 Since the founding of Kokomo it is this social enviroment that drives us as a band.
Founded in 2008, we played our first tour in autumn of the same year followed by countless concerts up until today and hence friendships in many parts of Europe and a tour in Japan in autumn 2015.

Kokomo is an instrumental rock band founded and grown up in the heyday of abandonment of vocals in “modern” rock music. We never frantically tried to reinvent the genre, but we hope we can set ourselves apart with new album and upcoming shows, reach people and evoke something in them. Then we have achieved all of our significant aims.

Neglecting vocals is not a trend for us, it is conscious backpedalling. We want particularly to let the music speak for itself and think trough this to be able to say much more in the end.

Right from the start our main focus was to have a good time, put a lot of love and effort in our music and everything related to it and play live as much as we can. Both on several tours we did and as support for acts like Caspian, God Is An Astronaut, Junius, A Silver Mt. Zion, This Will Destroy You, Maybeshewill and many more. One highlight must be the Germany tour with And So I Watch You From Afar.

In 2009 we released our debut “Matterhorn Bob And The Black Fair” on CD-R in a elaborate handmade packaging, followed by a split-LP with Kasan on Mayiniax Records in 2010.

As well our second album “If Wolves” as the last one “Kokomo” were both recorded by ourselves and released via i.corrupt.records and dunk!records.
After we collaborated with Terraformer for the project “Euryale” last year, comes now our forth album “Monochrome Noise Love”. The album was again recorded in our own studio in Duisburg. It will be released via i.corrupt.records, dunk!records and Aloud Records.